I’ve signed up for Y Combinator Startup School 2019 to focus on building a small bootstrapped business during the program’s 10 weeks runtime.

Why join with a bootstrapped business? Isn’t Y Combinator about doing the whole venture capital thing?

It is, but taking venture funding isn’t required and the program is free to enter. No matter if you want to raise money to go big or build a small business to support you and your family; The early beginnings are not so different for these two paths.

Besides, the perks are really good. I got $3000 in AWS credits. That alone was well worth signing up for.

What is Startup School?

Online courses aren’t the only thing, though. There are weekly group calls, some form of startup diary, where you track your progress, a founder forum and the truckload of deals I mentioned earlier.

From YC’s point of view SUS (short for StartUpSchool) is about increasing the amount of applications they get. This year they had roughly 30,000 companies in the program out of which some 6000 applied to the YC winter batch. That’s really not bad! If you’re interested in some more stats for this years iteration, check out SUS 2019 By the Numbers.

Startup School: How does it work?

After signing up, you’re asked to set up your company profile. It’s the usual: name, link to your homepage, a short summary, but also why you chose this to work on and how far along you are with your idea.

After filling out your profile you can go right ahead and watch the first week’s course content or dive into the forums and get to know other founders or perhaps look for a co-founder.

The program is structured in weekly ‘sprints’. You’ll give a quick written update about your past weeks progress and choose if you want to participate in that weeks group call until Wednesday night. Group calls are always on the following Thursday. Each week they unlock a set of video lectures, that loosely match the stage you’re in.

Pro tip: You can access all lectures on the Startup School Podcast without having to wait for them each week.

About your weekly updates: it really only takes 5 minutes to fill them out. Enter the number of users you’ve talked to this week, what you learned from them, what your goals are for next week and what your biggest obstacle is and you’re pretty much done.

They show nice little graphs for a handful of metrics you’re tracking each week. This is how my primary metric looked like. WTL stands for weeks to launch and ARR for annual recurring revenue. You see some stagnation until week 9 in my WTL and in week 10 I finally launched something and had $0 in ARR. More on that later. 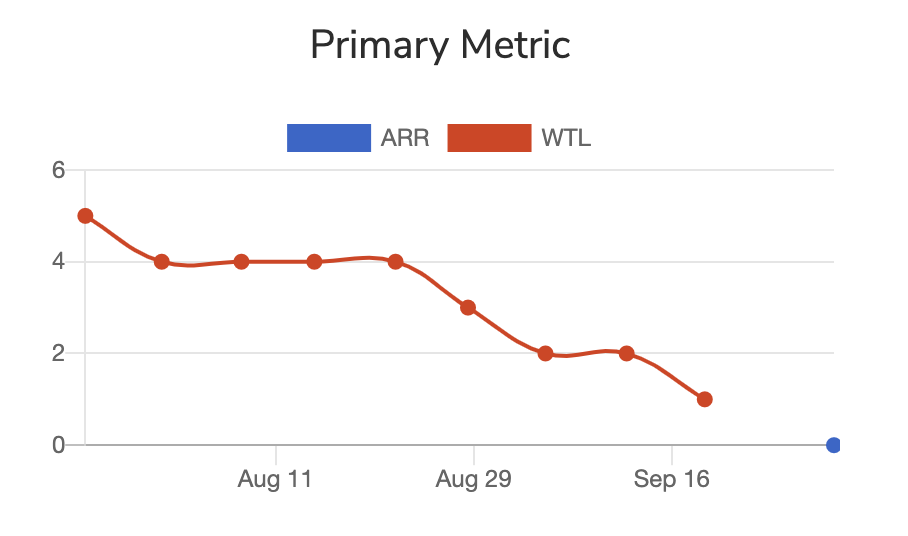 Also interesting: your secondary metrics over the course of 10 weeks. As you see, I sometimes didn’t talk to users. I know, not ideal 😨 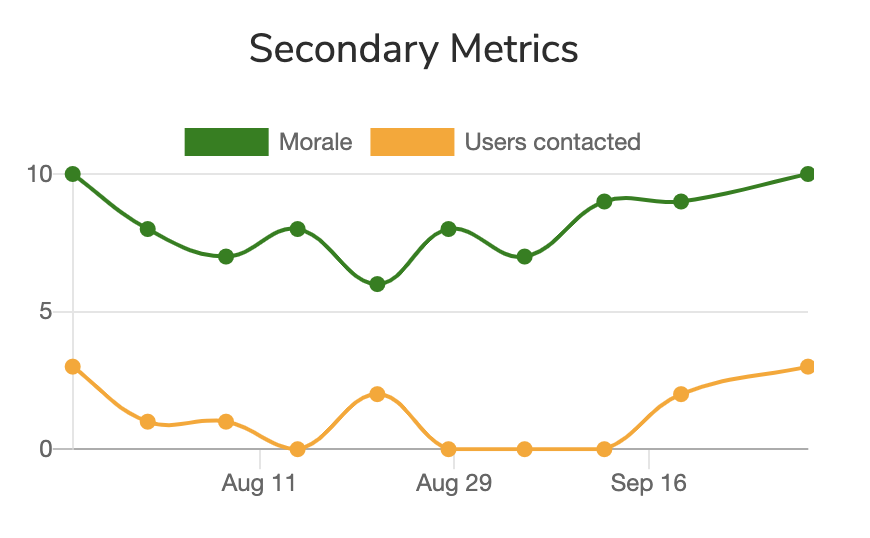 Once you’ve submitted your update you can join a group call for that week. Group calls are a format where you discuss your progress and obstacles, as well as pitch your product. Usually you’ll have 4-5 startups on one call and they’re always different. You’ll never meet a founder a second time. After your call, you’re asked to leave anonymous feedback for the other founders on the call and they will do the same.

If you’re looking to win the 15 grand, you have to not miss a single weekly update and should not miss more than three group calls for which you signed up. Applying to Y Combinator is mandatory.

Alright, with that out of the way, here’s my Startup School post-mortem.

My many product ideas

Prior to signing up for SUS, I came across an interesting idea I wanted to evaluate. A way for professional bloggers to be notified when high-value people sign up to their email list. I talked to a couple of people and realized that they all had different ideas how it should work and it quickly became apparent that this was not a burning pain. As a bootstrapper—with the limited resources I have—I need to create what is sometimes referred to as a painkiller, not a vitamin.

Pivoting—changing direction with your business idea—is not uncommon, as one lecture went into great detail. So I quickly moved on.

Next I wanted to see if there’s demand for a service that plugs into a businesses’ Stripe account and automatically donates a fixed percentage to a charity of their choosing. Coupled with a little widget that allows them to share their philanthropic achievements on their webpage.

This one was difficult for other reasons. Collecting money and routing it from business to non-profit is pretty difficult from a regulatory perspective. I talked to a handful of non-profits and potential clients and had to throw the towel in. It’s way too complicated to get started and demand was also not very high.

No problem, if it doesn’t work, just keep on pivoting. I finally landed on imgregex.com. An API that lets you find machine readable text on an image. I chose this specifically because I need it for myself and sometimes that’s the best reason to work on something.

With this many pivots during just 10 weeks, I ended up having to start from scratch a little more often than I would’ve liked. It didn’t matter much, though. There’s no real accountability in Startup School. Founders I talked to in my group sessions wouldn’t know I pivoted unless I told them about it.

It’s not like in a mastermind group, where a group of founders follow along with your progress, can give relevant feedback (because they know your history) and hold you accountable. Sure, it’s nice to meet new people every week, but in the end nobody really cares about your specific progress and how you arrived at the point you’re now. It’s probably difficult for Y Combinator to make it work with groups that stick together over the span of 10 weeks in a free online-course, where people most likely drop out in droves because of, you know, life.

Oh and dropping out is the name of the game when it comes to the group calls themselves. I think I didn’t have a call where everybody who should’ve been there, showed up. I had a few one-on-ones because of it.

But even if people show up it’s not really all that valuable. Every now and then you might get an idea/perspective you didn’t think about, but most of the time it’s not very actionable. Founders are mostly absorbed with their own problems and I sure don’t blame them. Well, and more often than not they’re trying to hit a home run with a huge B2C play or work on some grand vision with the “I’m just gonna build it and they will come” mindset. There’s only so much you can take away from that as a “slow-founder”.

Luckily, Anne-Laure Le Cunff organized a Telegram group with lots of likeminded founders that were a little more down-to-earth. There was a social element to it, that was missing from the official SUS program. There, we discussed ideas, motivated each other and helped out where we could.

If you’re reading this, getting ready for Startup School 2020, do yourself a favour and start a small Telegram group if it doesn’t exist yet. You’ll be happy you did.

I can definitely recommend checking out the lectures. For example, if you’re new to customer development, or have never heard of The Mom Test, definitely check out How to Talk to Users by Eric Migicovsky. The lecturers do a great job at explaining the concepts in an accessible way. Even if you didn’t enroll in SUS or don’t plan to, you should head on over to their podcast and fill up your queue.

Is Startup School worth it?

I launched imgregex in week 10 of Startup School. Their “show SUS” forum didn’t turn up any responses, but I didn’t expect it to. I myself wasn’t very active on the forums either.

As you probably guessed, I didn’t apply to YC. For one, I don’t think they’d accept me and also, I’m happy to take it one step at a time—slowly and steadily.

All-in-all I’m happy I signed up and I recommend you do the same. I needed a reason to work on something that I otherwise might have put off until much later and this was the perfect opportunity to get started. Well, and the perks are certainly not to be sneezed at, but I’m sure you’re well aware.

That said, as long as you manage your expectations, especially regarding the group calls and social interaction inside the program, you’re set. You know, sometimes it’s just nice to know that there’s this collective thing happening, even though you don’t interact with the people all that much.

Fun fact: back in my Teens and Twenties I actually preferred watching a movie on TV even if I had the DVD at home. It’s the same movie, better even because there are no interruptions, but it was just you watching it. Alone. On TV, you knew others were in this with you and that made all the difference to me. Humans are weird, I know.